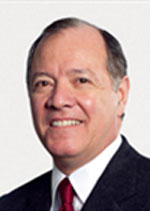 Benito Romano is a Partner at Freeh Sporkin & Sullivan LLP, part of the New York office, having joined the firm in May 2018. Prior to joining the firm, Benito was a partner at Freshfields Bruckhaus Deringer U.S. LLP, the Litigation Practice Group, where he was a partner since 2009. Benito focuses his practice on white collar defense, including SEC and other regulatory enforcement, and related complex civil litigation. Prior to Freshfields, Benito was a partner and the leader of the white-collar defense practice group at Willkie Farr & Gallagher.

Benito has represented public companies, board committees and individual officers in internal investigations and in a wide variety of criminal and regulatory investigations, prosecutions and related civil litigations, including investigations of price fixing in the airline industry by the U.S. Department of Justice, options backdating, fraud in the auctions rate market and the bankruptcy of Lehman Brothers by the SEC as well as the criminal trial of Conrad Black.

Benito earned his BA from New York University in 1972 and his JD from Columbia Law School in1976. He is admitted to practice in New York.