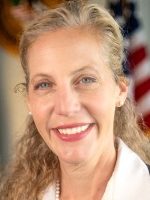 Prior to her selection as the First Assistant U.S. Attorney, Ms. Williams served as an Assistant U.S. Attorney in the Eastern District of Pennsylvania for over 15 years. During that time, Ms. Williams served as the Chief of the National Security and Cybercrime Unit and as the Crisis Management Coordinator responsible for critical incident response. While an Assistant U.S. Attorney, Ms. Williams was the lead prosecutor on a number of significant cases, including United States v. Colleen LaRose a/k/a “Jihad Jane,” which was the first prosecution in the history of the Eastern District of Pennsylvania charging material support of terrorism, and United States v. Nexus Technologies, Inc., which was the first prosecution nationwide charging a corporation with violations of the Foreign Corrupt Practices Act (FCPA). Additionally, Ms. Williams has served as a legal advisor during national security and other special events, including the September 2015 Papal visit to Philadelphia.

Over the course of her career, Ms. Williams has received numerous special achievement awards. For example, Ms. Williams has been awarded the Anti-Defamation League’s SHIELD Award, recognizing her successes in the fight against hate crimes, extremism, and terrorism, and for protecting civil rights. She has also received the Federal Trade Commission’s National Criminal Liaison Award, recognizing her exceptional commitment to consumer protection in partnership with the FTC. In 2022, City & State PA named Ms. Williams one of Pennsylvania’s “Law Power 100: The Legal Eagles Influencing Pennsylvania,” and in 2021 named her one of Philadelphia’s “Power 100.” In addition, Ms. Williams has been lauded for helping create and lead the Threat Intervention and Prevention Network (TIP Network), a public-private partnership that helps organizations assess and mitigate potential threats of targeted violence.

Before joining the U.S. Attorney’s Office, Ms. Williams worked at law firms in both Philadelphia and New York, concentrating her practice on white-collar criminal defense and First Amendment litigation. She also previously served as a law clerk to the Honorable Anthony J. Scirica of the United States Court of Appeals for the Third Circuit, and to the Honorable Anita B. Brody of the United States District Court of the Eastern District of Pennsylvania.